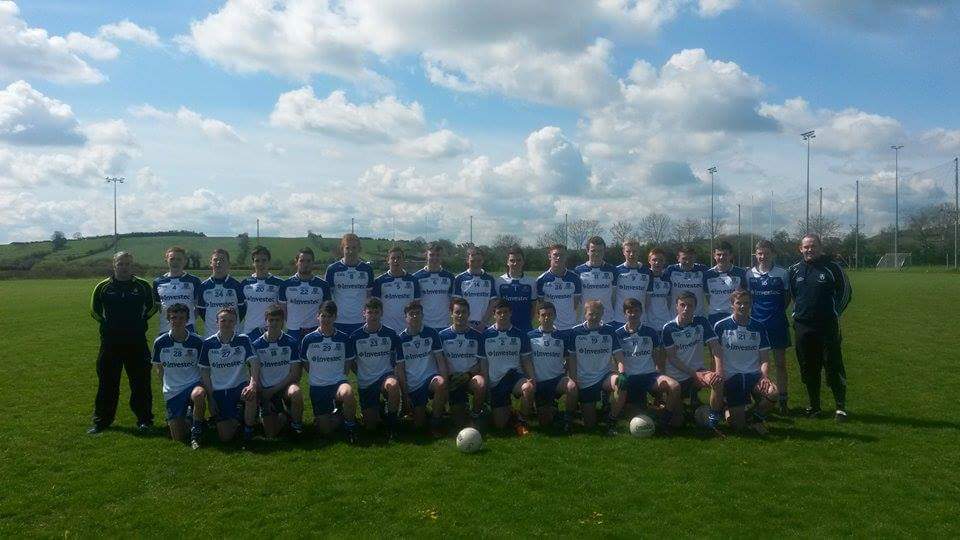 On Saturday last, the Monaghan under 16 Development Squad advanced to the semi-finals of the Buncrana Cup. Monaghan, who are the defending champions of the competition, qualified for the semi final at the expense of Cavan and Derry following the group stages that were played in near perfect conditions in Cloghan. The Buncrana Cup is the Ulster Council’s official competition for the U16 Academy Squads in each county. The format of the competition involves group stages that are made up of 3 groups of 3 counties in which each team play each other once. The winners from each group qualify straight into the semi finals, whilst the runners up must play off for the remaining semi-final spot.

The first game of the day saw Monaghan up against Cavan. Despite playing against the breeze in the first half, Monaghan started the game brightly and had the lion’s share of possession in the opening 10 minutes. It is worth noting that each game in the Buncrana Cup is only of 40 minutes duration so teams do not have the luxury of having time to settle into the game. Monaghan failed to capitalise on their early possession and the defence was caught napping as Cavan managed to score 1-2 on the break in the first half. Nevertheless, Monaghan were still ahead at half time on a scoreline of 1-4 to 1-2 with the Monaghan goal coming from the clinical Cormac O Connor. A pleasing aspect of the first half performance from Monaghan was the workrate of their forward line both on and off the ball. The forwards continued in this vein in the second half and forced numerous turnovers in the Cavan half of the pitch. There was also a marked improvement in the defensive performance in the 2nd half with Jamie Shields, Padraig Meehan and Josh Walsh particularly impressive. Cavan managed just 3 points in the second half whilst Monaghan rattled off an additional 1-10 to leave the final scoreline of 2-14 to 1-5. Cormac O Connor was again the scorer of the Monaghan goal. A particularly pleasing aspect of the second half performance from a Monaghan perspective was the impact made by the subs when introduced. Conor Doyle and Tommy Monaghan were especially impressive when introduced into the game early in the 2nd half. In fact, Doyle made such an impact that he forced his way into the starting team for the 2nd game of the day against Derry.

Subs Used: Tommy Monaghan(Eire Og), Conor Doyle(Clontibret), Oisin Gleeson(Athabog), Kevin Murphy(Currin), Tommy Croarkin (Monaghan Harps), Conor McCabe (Latton).
The second game of the day saw Cavan up against a hotly-fancied Derry team. Derry were backboned by players from the St Pats Maghera, St Pius Magherafelt and St Mary’s Magherafelt school teams that have dominated Ulster Colleges Football at this age group over the last number of years. Derry dominated this match from the very first whistle and ran out 3-6 to 1-8 winners. Cavan finished the game strongly by scoring 1-4 in the final 5 minutes but the result of the game was never in doubt.

With both teams already defeating Cavan, the Monaghan-Derry game was set to be a winner-takes-all affair. Just like in the first game of the day, Monaghan showed great intensity and desire from the first whistle. With Hugh McGinn and Dean Connolly dominating at midfield, Monaghan took an early lead from which they didn’t look back. Cormac O Connor hit his third goal of the day as Monaghan went into half-time with a 1-4 to 0-2 lead.

Derry made numerous positional and tactical changes at half time but it was of limited affect with Monaghan commencing the second half strongly. Monaghan has extended their lead to 8 points when they were hit by two Derry goals on the break. However, the farney men responded in great fashion with a goal from the impressive David Hanley. Just two minutes later, Monaghan has rattled the net again through an Aaron Mohan goal. Mohan added a point soon after to cap a very effective display after being sprung from the bench with 15 minutes remaining. By the end of the game, Monaghan had won by a scoreline of 3-8 to 2-3. The Monaghan performance in the second half was typified by the strength and power of its half back line of Jack Gormly, Ryan Mohan and Abraham Dixon. At the other end of the field Sean Burns, Robbie McAlister and Ed Walsh not only showed their quality as forwards but showed a great willingness to force turnovers over the course of the two games.

Monaghan now progress to the Buncrana Cup Semi Final which takes place on August 15th. They are joined there by Armagh who defeated Tyrone and drew with Antrim in their group, and by Donegal who had convincing victories over Down and Fermanagh. The other 6 Ulster counties must now play off to decide who shall take the last semi-final position. In the mean time, the plan for the Monaghan team is to take part in the Gerry Reilly tournament in Oldcastle where they have been drawn to play against Cavan, Meath and Wicklow. This competition commences on the weekend of the 27th/28th June.